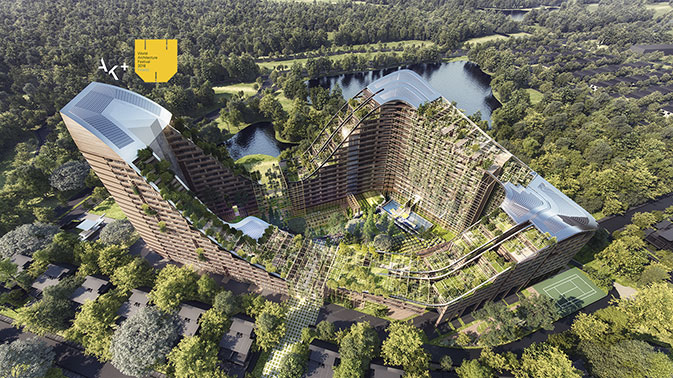 Does a bold form necessarily create an identity? A building with a striking cubature is always going to be eye-catching, but the Lake Garden development in Johor Bahru, Malaysia, from the Singaporean architecture firm AK+ is designed not only to create a sense of identity within the urban landscape but also to have a lasting influence on the local urban community. With its blend of function, form and impact, the design proved a hit with the jury at the World Architecture Festival, sponsored by Miele, winning the project a place on the competition shortlist.

The site of this development is in a rather nondescript suburb of the major city of Johor Bahru, which occupies the southern tip of Malaysia opposite the island of Singapore and is one of the country's important economic centres. The 2.75-hectare site takes the form of an irregular oblong some 10 kilometres from the city centre.

The design chosen by the architects features a perimeter block construction enclosing an open space. The roofline slopes downwards in the direction of the city centre to create a sense of looking outwards from the inside. Another part of the building is shaped to form a high pinnacle which provides a 360-degree view of the city and surrounding area. The resulting building silhouette is unique and set to become a readily recognisable landmark for the whole area.

With retail premises on the ground floor and a farmers' market in the internal courtyard, the complex is designed to encourage commercial use, while a network of public squares that link in with the surrounding urban space will connect residents and visitors. The upper floors are occupied by the apartments, all of which overlook the internal courtyard, helping to animate this external space. This works in the opposite direction too, with the apartments benefiting from their view onto this green space. In addition, the undulating roof shape enables many of the apartments to feature a roof terrace.

The architects' aim is to realise a multigenerational concept by creating living spaces tailored equally to the needs of students, families and seniors to foster a mutually supportive environment. This idea of maintaining close links between the generations is still today an integral part of Malaysian society. In addition, the presence of a farmers' market and retail outlets provides local employment opportunities. While the building's shape is designed to outwardly create a bold identity, breathing new life into the district, the co-housing concept – which is not apparent in the building's construction – works on an internal level, allowing the apartment owners to feel part of the residential community and to identify with the building.

This combined societal and architectural approach makes this design an eminently suitable selection for the World Architecture Festival, which sees its role as providing a platform for innovative and relevant architecture of this kind. The Commercial Mixed-Use Future Project category presented by Miele gives exposure to designs which – like the Lake Garden Co-Housing project – take up and expand on current themes.