When planning a multifunctional building complex in an existing urban environment, a number of conflicting demands first have to be met: autonomy versus integration, heterogeneity versus homogeneity, community versus individual. Woods Bagot’s Melbourne Innovation Precinct mixed-use project comes up with a clever solution to these apparent contradictions. It is divided into small sections and yet forms a single whole. And it has a strong identity that blends in harmoniously with the surrounding urban structure. These qualities make it a model solution for projects of this nature.

Even the space allocation plan for the Melbourne Innovation Precinct project is impressive. To be built next to the University of Melbourne’s School of Engineering, this development is to comprise an open innovation laboratory, Science Gallery Melbourne, apartments, retail premises and a childcare centre. And the brief the architects at Woods Bagot were given regarding the external impact of their building complex is even more demanding: it must contribute to the city’s ambition to transform this district into Australia’s leading interdisciplinary centre for innovation and a powerhouse of innovation, productivity and sustainability.

Its location lends itself perfectly to this vocation: the building will form the gateway to Melbourne’s university district right on the edge of the city centre. It is flanked by roads on three sides. The surrounding urban landscape is very heterogeneous and of varying height. To dovetail the large site effectively with the surrounding area, the architects have designed a central public square criss-crossed by diagonal paths.

The remaining areas running along the edge of the block will be publicly accessible and feature facilities such as retail premises and the innovation laboratory. An open-plan ‘superfloor’ above the public area will connect the string of small ground-level buildings, providing a large, flexible-use space. This will create a public zone in which the district’s existing community will be able to mingle with its new users. This is where the underlying idea comes over most strongly: if everyone is able bring their knowledge and individual contribution to the mix, what results is something really new: a community of individuals becomes an innovation generator.

Only the central square in the middle will be open-air. This will enable it to function also as an oculus, providing natural light on all sides. Above the superfloor, a variety of structures will provide spaces such as university rooms and postgraduate student accommodation. Some of these structures will be significantly taller than the existing buildings.

The different parts of the building will be united visually by a single façade design developed using scientific criteria. The objective of the façade design was to let as much sunlight into the building as possible while eliminating the negative effects such as excessive brightness and heat. The result is a range of shapes and colours that create a striking and yet restrained façade design that takes into account each façade's orientation, the sun’s insolation, the surroundings and the complex’s diversified use while creating a distinctive identity. 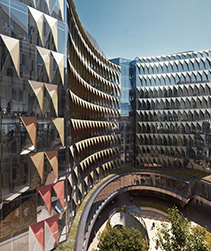 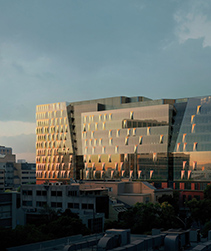 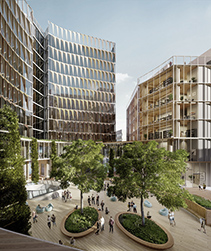 When asked about the unique challenges of this project, Hazel Porter, principal and project design leader at Woods Bagot said,

“We needed to completely re-think what the project could offer back to both the university and to Melbourne’s urban innovation. What we've generated are new forms and, importantly, opportunities for exceptional circulation through the site and a great diversity of spaces at ground level, as well as maximizing sunlight for wellbeing and sustainability.” 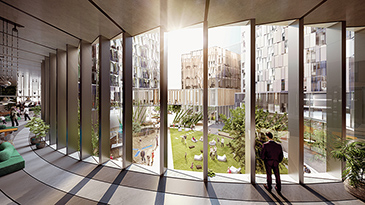 With this building, Woods Bagot does not just answer the questions of what this part of Melbourne should look like and how the city should develop in the future. Its sensitive balancing of apparently contradictory demands and the innovative added value created for all users through the use of unifying solutions can provide answers to great issues of our time: what should the relationship between community and individual look like? This project’s exemplary nature was recognised by the jury of the World Architecture Festival, which shortlisted the design in the Commercial Mixed-Use Future Project category presented by Miele.

This article is published in order to highlight Miele’s constant engagement with outstanding architecture, trendsetting ideas and concepts in the field of architecture and design. The featured project is not an official Miele reference.