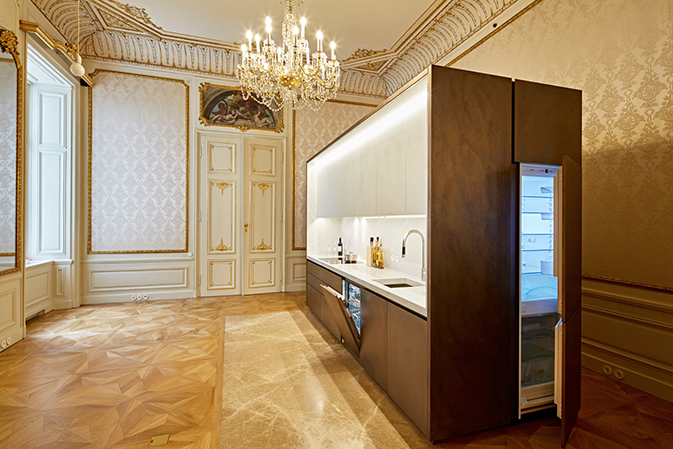 Vienna: contemporary living in two palaces rich in tradition in the Herrengasse.

Many have experienced the grandeur of the palaces in the Herrengasse: noble occupants and hotel guests, or in more recent times, as the editorial headquarters of the "Standard" daily newspaper. Today the Palais Trauttmansdorff and Palais Batthyány-Strattmann can be inhabited again – at least the upper floors. The architect Martin Mittermair talks about the attraction of old walls and integration of modern comforts.

What was it like to delve into the historic interior life of the building – were there surprises?

Martin Mittermair: The comprehensive examination of the Palais Batthyány-Strattmann and Trauttmansdorff, which lasted almost two years, did indeed uncover many surprises. The Herrengasse in the centre of Vienna follows the Roman road from the 1st century A.D. which connected forts with legionary camps. For example, a spoil* of a Roman grave aedicula was found in the cellar vaults of the Palais, and now adorns the grand staircase of Palais Trauttmansdorff. Or, to give an example from the Baroque period, today a unique octagonal stairwell that could be attributed to Fischer von Erlach graces the Palais Batthyány-Strattmann in all its refurbished finery.

Both palaces tell a seven hundred year old story of architecture, society and politics, which manifests itself in a variety of structural transformations. From the outset, my goal was to bring the historic and lavish sequence of rooms back to life. This also meant reversing certain structural changes made in the 20th century. 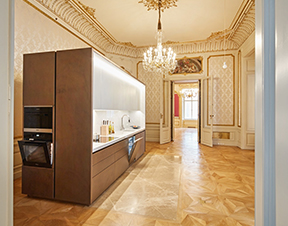 Is the design of the apartments a reconstruction of the historic original?

Martin Mittermair: The design of the apartments is not a reconstruction, because fortunately the state rooms of the Palais Trauttmansdorff have been almost completely maintained and could therefore be restored holistically following key historical monument preservation criteria. Essential technical constructions, to meet the demands of current modern convenience, were integrated almost invisibly into the historic fabric. Spatial extensions of the state rooms and all further 21 apartments are articulated independently and contemporarily in a design language based on their historical legacy. 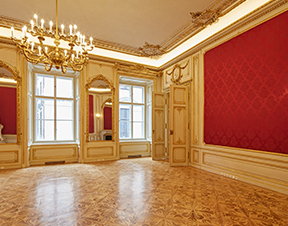 How do you unite historic substance with the high demands of modern convenience?

Martin Mittermair: The union of historic substance with today's demands for convenience requires precision planning and workmanship of the highest degree. So for example the new windows were made to the exact historic profiles, but with modern coating technology integrated into the dimensions and compliance with current requirements for insulated glass. However, the visible window handles were newly cast in accordance with the historic prototypes. Heating and cooling appliances, all electrical installations, data cabling etc. was fully and invisibly integrated into the staterooms. To do this, the wood panelling had to be carefully removed from the walls and then refitted when the installation of the technical systems was complete. 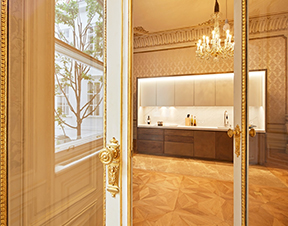 Is it typically Viennese to live in a palace?

Martin Mittermair: Living in a palace is also unusual in Vienna. The vast majority of Viennese palaces are used by public institutions and ministries as offices and meeting rooms. Fortunately, the proprietor, the Karl Wlaschek Private Foundation, took the opportunity to make both houses available to the public again in the form of rented apartments – entirely in keeping with the purpose of the Foundation: general philanthropy and maintenance of significant and protected buildings for the cityscape.

* Spoils are artefacts from older cultures which are reused in new renovations.