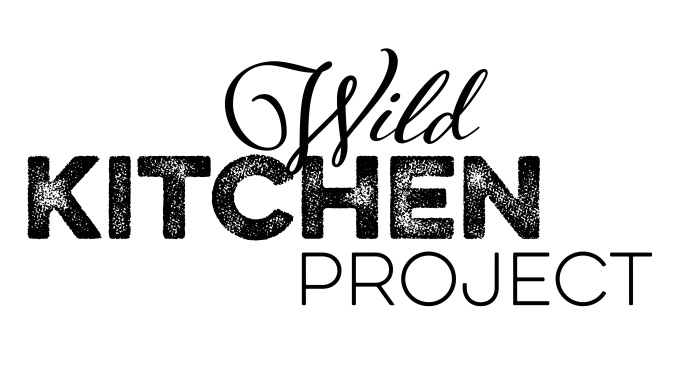 BBQ rub instead of juniper berries, sustainable meat instead of sanitised joints, passion instead of indifference. Wild Kitchen Project has built a community of barbecue teams, outdoor chefs and hunters to promote game as an alternative to industrially produced meat and a holistic approach to meat consumption. The community project started with recipes and has now created a range of cookbooks, videos and courses. With their focus on all things “wild” and their modern approach, they have not only discovered a promising niche, they are also successfully building on it. 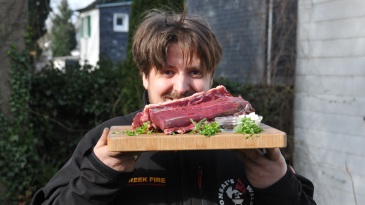 Stephan “Bonsai” Berghaus is a paramedic and barbecue expert. As the owner of Bonsai's Wild BBQ, he offers catering, events and BBQ courses. His grilling career started with a birthday present from his wife: his first Weber barbecue awoke a passion which eventually led to competition victories and a serious business model. This expertise runs in the family. Berghaus learned how to make sausages from his grandfather who was a butcher and at American barbecue events, he has been known to enter as a team together with his wife, daughter and dog. In 2015, he founded the Wild Kitchen Project together with Jana Rogge and Michael Schlecht and he has put his blood, sweat and tears into the project as an organiser, communicator and BBQ expert ever since. In his hometown of Wipperfürth in Germany, he is better known by his nickname Bonsai. 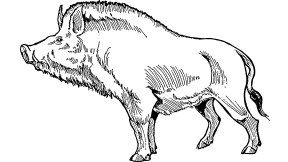 Honouring the meat that we eat

The Wild Kitchen Project is a topical response to the issues surrounding factory farming and food waste. “Those who want to eat meat sustainably and with health in mind should not overlook game. You will never be able to prescribe a particular diet for a deer in the wild,” emphasises Stephan Berghaus, founding member and co coordinator of the initiative. “We not only specialise in game, we also follow the nose-to-tail approach, meaning we always try to use the whole animal.” This means skinning the game themselves and creating recipes to make use of the offal and bones. “We try to use everything to show the animal the greatest possible respect as a living creature and don't just use the supposed prime cuts.”

From archery to a bestseller

The three founding members got to know each other through the 3D archery scene. At joint outdoor events, they came up with the idea of combining sustainable game meat, recipes and modern grilling techniques. In 2015, the Wild Kitchen Project was launched with four teams and joint meetings for recipe creation and tasting. “We quickly became so excited about the variety and the essence of the recipes that creating a book seemed like the natural next step,” recalls Berghaus. In 2016 the dream became reality: the first cookbook from the Wild Kitchen Project was printed with support from sponsors. Founding member Jana Rogge, who is also the manager of a publishing house, contributed her expertise and was responsible for the main design. Stephan Berghaus coordinated the teams and the scheduling, established contacts and helped Rogge with the implementation. They designed everything themselves – from the recipe selection to the layout. After just three months, the first 2000 copies of the book had sold out. No one expected it to be such a resounding success and this was an incentive to continue expanding the project. “We received a lot of feedback from hunters who were surprised by what they could do with supposed B and C cuts. Osso buco made from wild boar knuckle; putting ribs on the barbecue instead of in the bait box. Thiswas exactly what we wanted to convey.”

The Wild Kitchen Project already had an active online presence even before the book was produced, but its publication only intensified the communication in the online community. Ideas and recipes are posted via social media and on the group's own homepage and YouTube clips that have been self-directed or produced in collaboration with partners are also shared. Cooking courses that reflect the project's approach were also offered alongside the book, partner projects and online communication. Each course involves the participants skinning game, precisely dissecting it into the cuts commonly found in the butcher's trade, and then preparing it using various different recipes. 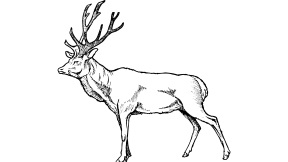 The recipes are a world away from standard goulash. “We take a creative and modern approach towards preparation instead of constantly firing up the overworked juniper cannon. For example, we like to use a blend of spices commonly used for barbecuing.” But the project also has a passion for revamping traditional recipes, such as Berghaus' grandmother's recipe for braised hare. The Wild Kitchen Project purposefully plays with the ambiguity of its name. “Wild” can also mean being adventurous, experimenting and using new techniques – a fundamental part of their recipe for success. “The haut gout, the typically strong flavour of game meat which used to develop as a result of prolonged ageing, is now no longer an inherent feature thanks to high hygiene standards. Game is a tender and delicious meat that can be prepared in many different ways using modern methods – whether that is sous vide, in a Dutch oven or simply on a grill,” insists Berghaus.

The inspiring success of the first book provided the basis for volume two: Wild Kitchen Project 2.0 was published in 2018 – “Wild & Weide” (Game & Graze). “With this book, we not only wanted to expand our niche, we also wanted to pay tribute to the work of selected farmers,” explains co-editor Berghaus. “There are farms in many regions that produce extremely high-quality meat while maintaining excellent welfare standards. This is another way to enjoy meat sustainably.” The positive feedback speaks for itself – book three is already in the works. Round three will feature wildlife in and around rivers. The first appetising glimpses into the new book will be available online in the coming months.

What does it encompass?

“Game” is a term that is used broadly in this project's cookbooks. Readers will also encounter unusual dishes such as raccoon goulash and heron breast tortilla. The idea of incorporating these recipes came about through a collaboration with Paul Parey publishing house, but they were right up the team's street. “This was the perfect next step for our sustainable utilisation concept. It gives meat from animals that were not originally shot for consumption a logical purpose,” explains Stephan Berghaus. 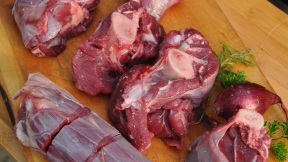 Fore and hind knuckle of the deer, sawn into thick slices, plus the two rose cuts from the haunches (approx. 2.5 kg in total including bones) 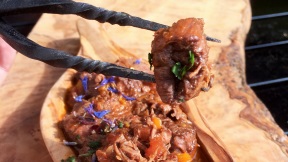 Bonsai: “I am a big fan of stews and I especially love the Italian dish osso buco. “Osso buco” literally translates as “bone with a hole” – referring to the marrow bone, which gives the sauce its incomparable flavour. Game knuckles can be obtained cheaply from a gamekeeper because they usually can't find a use for them and they are difficult to sell in the traditional game meat trade. If you are buying entire haunches or shoulders, you can ask for the lower leg pieces to be kept on. If there isn't enough meat, simply add the ribs from the same animal, which are also cheap to buy. The dish takes quite a long time to cook, but doesn't require a lot of attention. Heat enough coals for moderate heat and arrange them in a pile so that you can heat up the pot on top. Now sear all the cuts of meat in clarified butter and sprinkle over salt and pepper. You only need to give the meat a stir every now and again. While this is cooking, you can finely dice the onions and then add these to the pot together with the tomato paste and maple syrup and lightly brown them. Then add the diced vegetables and the “homeopathic dose” of garlic and douse everything with wine. Use as much wine as needed until the meat is almost fully covered.

The meat needs to cook for around 3 hours with a low bottom heat and a moderate top heat. Cooking for longer won't do the dish any harm. If in any doubt, giving it a taste will help you decide if it's ready. Having a bit of patience will make the meat wonderfully tender. Osso buco – like goulash – is a dish that tastes even better when it is heated up a second time. So don't worry if you make too much!”

This article is part of our magazine "Welcome & Stay". You are welcome to download it. You can find this article on pages 14-17.