From prison to designer hotel: The metamorphosis of the Offenburg Liberty

In magazines and blogs and on Instagram – all roads lead to Offenburg's liberty. The hotel located in the former prison in the county seat is still attracting great interest more than a year after its inauguration. The daring decision to open a designer hotel in a former prison turned out well.

The owners, the Funk brothers, and their team worked long and hard to make this happen. Coming to terms with the office for the protection of historical monuments wasn‘t exactly easy, says Heiko Hankel, Managing Director of the company which has run the Liberty since January 2018. “We wanted to preserve what had stood the test of time but we didn‘t want to stay in the Dark Ages. Our intention was to offer high-class, modern standards”. The tiny alabaster glass windows in the cells, for instance, didn‘t make last century‘s jailbirds happy, and nor would they meet the demands of the 21st. century. In order to strike a happy medium which would satisfy both the hotel and the preservationists, both parties had to rethink and transform many a mundane, functional fixture into pure design.

For example, although large panorama windows were fitted, the original window grates were kept and used as decoration here and there. The old mind-your-head cell doors are no longer in use, yet they adorn the corridors as gateways to the past: Opening them reveals photographs of the former jail. Old beams sacrificed in the course of the renovation work were converted into tables. Existing masonry was not replastered; instead, it was painstakingly laid bare, allowing the red brickwork to artfully combine with deep blue and green-grey hues. Leather and textiles adds homelike charm to the utilitarian industrial design. Finding a style which brought together history, design and modern appeal on an equal footing required numerous discussions, endless meetings and a willingness to experiment on both sides. “A lot of fantasy was needed to imagine the two compact buildings dating back to 1845 and 1849 as a designer hotel. Radically transforming the claustrophobic flair of a correctional facility required rigour, tenacity and lots of creativity. But now those policing the preservation orders agree with us that we came up with a perfect solution which is fully consistent with history”, Heiko Hankel reports, not without pride.

All this agonising about details proved to be the secret to success. Indeed, it is the elaborate design, quality and extensive service which convinces guests, says the man from Baden in the far south-west of Germany. These naturally include modern facilities such as WiFi and Click&Share Bluetooth technology in the conference room. There is still a personal touch at check-in, though: “We always like to apply the personal touch”, the hotel manager explains. “We accompany every single guest to their rooms, explain the technology, the mini-bar, the air conditioning, and so on. Of course digital is important, but we place great store by the human touch – without airs and graces”.

And this is well received. The voices of the Cassandras who scorned the idea of a designer hotel in Offenburg have died away. “Many companies are pleased that we are around because they now no longer need to look as far afield as Baden-Baden or Strasbourg to find first-class quality”, Hankel, a man with 28 years of experience in the trade, explains: “Now, they can stay in Offenburg”. The Liberty has achieved much more than simply finding a niche for itself. It obviously caters to real and extensive regional needs. It pays off not to be a theme hotel. “There are enough of those in the area. We wanted to be a high-end product”.

Of course, nothing is perfect in itself. Take the menu, for instance: it has already been revamped twice, and the butler service which featured in the original version has since been scrapped. It was too much of a good thing! But even after the launch there are still challenges around. The last hot summer, for example, completely contradicted the climate study we commissioned before building work began. Now, air conditioning has to be retrofitted in 29 rooms while business continues.

Another challenge is overcoming the inhibition threshold associated with the term “designer hotel”. “Many local residents wouldn't dare enter the Liberty for fear of it being too expensive”, Heiko Hankel explains. “But when they do pluck up the courage, they are positively surprised. You can eat and drink in our restaurant and our bar without it costing an arm and a leg. We now want to refocus our attention on communicating that”.

A rise in the number of bookings proves the strategy to be spot-on. Thanks to a coherent overall concept, the huge experiment has been a success. Now our aim is to ensure continuity, experimenting only with minor tweaks, for example to the menu. We still attach great value to the history of the building, the director stresses: “We will pay special attention to the past and keeping it alive. We simply owe it to the building and its history”. 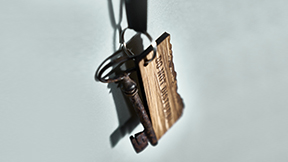 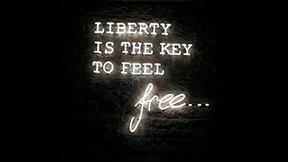 A brief history of the building:

The Offenburg prison was commissioned by Leopold, the Grand Duke of Baden, during his reformation of the justice system. The front section of the building was constructed between 1843 and 1845; the rear annex between 1847 and 1849. For the first time, prisoners were given meaningful work to occupy their minds, either outdoors or in their cells. Food for inmates was cooked by the wife of the head warden.

First half of 20th. century

1929 saw the modernisation of the prison: Electricity, central heating, showers, a wash-basin with running water and a WC was installed in each cell, and a library provided for the edification and education of prisoners. That put paid to chamber pots and the practice of slopping out.

Second half of 20th. century

By 1971, further renovation of the old prison was urgently needed. The old steam heating system, in a state of ill repair, was replaced by oil heating. At the same time, a large, new workroom was created which put an end to cell work. And yet, it was becoming apparent that all efforts were merely a stay of execution.

In view of prison overcrowding and the small size of cells, a new prison was by now unavoidable. In April 2009, a new correctional facility was opened in Offenburg, and the old prison on the Grabenallee closed its gates, bringing to an end a long history. In 2016, after years of planning, work commenced on the carcase of the old building. In September 2017, the Liberty was opened.

This article is part of our magazine "Welcome & Stay". You are welcome to download it. You can find this article on page 4-7.